Today's poem is the first part of "The Lady of Shallot" by Tennyson which is tragic. I usually don't go for things where characters have absolutely no agency, but King Arthur is on my mind. 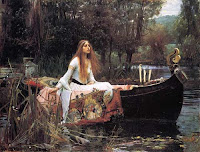 Ditto! My favorite painting as well, and I love the poem! Ever hear the version sung by Loreena McKennitt? It's lovely. :)