Every year, the Cooperative Children's Book Center tracks how many books are by, or about, people of color. They just released the numbers for 2014.

For some context--they estimate 5000 books for kids and teens were pubbed. They looked at 3500 of them. I took the number of books about an ethnic group and divided it by 3500 to get the percentage. I then did the number of books by an ethnic group and did the same thing. (CCBC breaks it out into two numbers--how many are about that ethnic group, and how many do not contain significant cultural content of that group. I added those two numbers together to get a total.)

I then graphed those percentages against the percentage of the US population of the same ethnic group. (Source: 2013 Census Bureau info) (I added the numbers for Asian and Native Hawaiian/Other Pacific Islander to get a number to compare to CCBC's Asian Pacific/Asian Pacific American)

Ideally, all of these percentages should be equal. 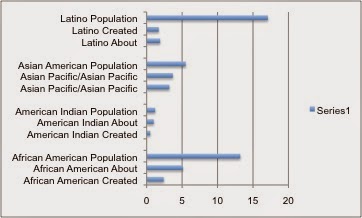 We can certainly do better than this.

Links to Amazon are an affiliate link. You can help support Biblio File by purchasing any item (not just the one linked to!) through these links. Read my full disclosure statement.
at 9:05 AM No comments:

Coming Soon (and I can't wait)

Looking through the upcoming hardcover adult fiction lists for work, here are some books that caught my eye:

Paris Red: A Novel by Maureen Gibbon. A novel exploring Olympia--the model the posed for it, the painter who painted it, and how it changed everything in their lives. Pubs April 20

The Scapegoat: A Novel by Sophia Nikolaidou, translated from the Greek by Karen Emmerich. Based on a true story, a school student is assigned the task of finding the truth in the murder of an American journalist in Greece in 1948. The killer was found, but after serving his time, claims his innocence. Out now

Me and My Daddy Listen to Bob Marley: Novellas and Stories by Ann Pancake. I've been getting into short stories lately and these take place in rural Appalachia--a place that is so geographically close to me, but is a whole different world. Out now.

A Darker Shade of Magic by Victoria Schwab. Library Journal gave it a star and this part of a sentence is what sold me "the three Londons we see (and rumors of the one we do not)..." Pubs February 24

Love in the Age of Mechanical Reproduction: A Novel by Judd Trichter. Eliot fell in love with an android, and she's been kidnapped and sold off for spare parts. Now he has to buy up the parts, reassemble her, and then hunt down the people who did this to her. Out now.

Bones & All: A Novel by Camille DeAngelis. Kirkus said this coming-of-age story about a ghoul who keeps eating people read like a cheesy episode of Buffy. Like that was a BAD thing. Pubs March 10.

The Last Flight of Poxl West: A Novel by Daniel Torday. Eli idolizes his uncle Poxl--debonair fighter pilot and WWII hero, but as Eli learns more, he realizes that there is a darker side to Poxl's life and the legend he's built up for himself. Pubs March 17.

A Love Like Blood: A Novel by Marcus Sedgwick. Um, Marcus Sedgwick wrote an adult book. The only other thing you need to know is that is it's out now.

The Prince: A Novel by Vito Bruschini, translated from the Italian by Anne Milano Appel. The most promising of a handful of mob books on this month's lists. This one covers the true story of how mafia began in Italy, Irish and Italian gang turf wars in New York, and WWII. Pubs March 10

The Devil's Detective: A Novel by Simon Kurt Unsworth. A detective novel about a serial killer--but it takes place in Hell. Intriguing. Pubs March 12.

The Mouth of the Crocodile: A Mamur Zapt mystery set in pre-World War I Egypt by Michael Pearce. It's the subtitle that got me--pre-WWI Egypt. This is the 18th in a series I'm unfamiliar with, so I'll have to start at the beginning with The Mamur Zapt & the Return of the Carpet). This new one pubs on March 1.

Murder in the Queen's Wardrobe: An Elizabethan Spy Thriller by Kathy Lynn Emerson. Ladies in waiting that double as spies? Elizabethan England and the Russians are involved? Please download this into my brain ASAP. Pubs March 1.

Duet in Beirut: A Thriller by Mishkla Ben-David, translated from the Hebrew by Evan Fallenberg. A spy thriller written by a former Mossad agent. Ben-David's a best seller in Israel and this is his first novel translated into English. Pubs on April 14.

Leaving Berlin: A Novel by Joseph Kanon. Alex fled the Nazis for America, but in the McCarthy era, his pre-war activities mark him for deportation. He strikes a deal with the CIA--he'll return to Berlin, as their agent, and earn his way back to the US. But the CIA wants him to spy on those it was hardest to leave the first time. Pubs on March 3.


Links to Amazon are an affiliate link. You can help support Biblio File by purchasing any item (not just the one linked to!) through these links. Read my full disclosure statement.
at 9:05 AM No comments:

ALA's Youth Media Awards are always an exciting day for those who love youth literature. This is when the big prizes (Newbery! Caldecott! Printz! more!) are announced.

There are several specialized awards, such as the Coretta Scott King awards for books by African-Americans about the African-American Experience, and there has been some worry that these awards "ghetto-ize" books by diverse authors. While committees can't explicitly take it into consideration, are books by diverse authors unintentionally overlooked for the bog awards because oh, they'll just win the other one, that's "for them"?

Here are some of the diverse titles awarded today Caveats: I'm only listing books where diversity wasn't a criteria, so I'm not listing winners of the Schneider Family Award, Coretta Scott King awards, Pura Bel Pre, Stonewall, or Batchelder because listing all of them inflates the numbers. Many of the books listed also won these awards though, because they're awesome books. I may have also missed a few titles.

The Crossover by Kwame Alexander

This One Summer by Mariko Tamaki, illustrated by Jillian Tamaki

I'll Give You the Sun by Jandy Nelson

H.O.R.S.E.: A Game of Basketball and Imagination by Christopher Myers, narrated by Dion Graham and Christopher Myers (yes, I know this links to the book. It won for audio, but Amazon doesn't seem to carry it)

Separate Is Never Equal: Sylvia Mendez and Her Family's Fight for Desegregation by Duncan Tonatiuh

Gabi, a Girl in Pieces by Isabel Quintero

Laughing at My Nightmare by Shane Burcaw

The Port Chicago 50: Disaster, Mutiny, and the Fight for Civil Rights by Steve Sheinkin

Bingo's Run: A Novel by James A Levine

Confessions by Kanae Minato, translated from the Japanese by Stephen Snyder

Everything I Never Told You: A Novel by Celeste Ng

The Terrorist's Son: A Story of Choice by Zak Ebrahim with Jeff Giles

AND! In addition to the books, the 3 authors honored were... Donald Crews, Sharon M. Draper, and Pat Mora.

Updated 2/20: I'm adding The Adventures of Beekle: The Unimaginary Friend by Dan Santat


Links to Amazon are an affiliate link. You can help support Biblio File by purchasing any item (not just the one linked to!) through these links. Read my full disclosure statement.
at 2:46 PM No comments: