RWA response to That Book

In my post on Wednesday I wrote I haven't had to explain to her (yet) why our Temple has a perimeter of ugly concrete planters, because if you put flowers in it, maybe we can glide over the fact that our house of worship needs protection against car bombs.

And when I got home, I saw that RWA put out an official response. I'm going to quote the entire thing here:

The Board of Directors of the Romance Writers of America (RWA) has received a great deal of heartfelt and moving feedback about some of the finalists in this year's RITA contest. We want the membership to know we have heard your concerns and have spent days discussing them.

The question that we must answer is what RWA as a writers' organization should do when issues arise regarding the content of books entered in the RITA contest. Discussions about content restrictions inevitably lead to concerns about censorship. Censoring entry content is not something the Board supports. If a book is banned from the contest because of its content, there will be a move for more content to be banned. This is true, even especially true, when a book addresses subjects that are difficult, complex, or offensive.

There were 2,000 entries in the RITA contest this year. The RITA is a peer-reviewed award. There is no vetting of content before a book may be entered. Books are entered, not nominated, and those books are judged by fellow romance authors. The Board believes this is how the contest should be run. RWA does not endorse the content of any book entered in the contest. We do believe, however, that education and conversation are important in dealing with the concerns expressed. To that end, we will open an online forum on the RWA website for members to discuss their concerns. This is not a perfect solution, but we believe open dialogue, not the censorship of content, is the right way to handle the issues expressed.


They missed the point entirely.

Because here's the thing: there are already a lot of guidelines and content restrictions surrounding what is eligible to be entered. For instance, the book has to be a romance, and they define what that is. (And let's not forget, the set-up of this book is not a romance. The set-up of this book is a major imbalance in power dynamic [honestly, I can't think of a larger one right now] leading to Stockholm Syndrome disguised as a romance. If they had sexual contact, it would be straight-up rape.)

Guidelines aren't censorship. (And let's be really careful using the word censorship when we're talking about the Holocaust, ok?)

Mostly, this statement utterly fails to address the fundamental problem. RWA does not endorse the content of any book entered in the contest. The problem wasn't that the book was entered. I've been on several award committees--bad stuff gets nominated and entered all the time. That's why there's a process between entry and winner. The board believes in the process, but that process completely failed this time. Because the problem was never that the book was entered. The problem is that it was a FINALIST. Being a finalist is a big deal. "RITA FINALIST" becomes part of an author bio and book marketing. It's a big deal. RWA endorses its finalists. If it didn't, the RITA would become a meaningless award.

But we should all feel great, because RWA is going to have a new forum on its (member-only) website where the echo chamber that created this debacle can talk about it. I'm sure the people who were betrayed and now feel unsafe by this book being a finalist and this non-response will feel super-duper comfortable participating in this forum.

I've gotten a lot of support these past few days. So many people have shared my post and reached out to me. I haven't heard anything from Bethany House, but four members of the RWA board wrote back in a personal capacity, and at least one more shared my post on Twitter. I've dodged a lot of the hate that others have gotten. There was deafening silence from some quarters, but it's the same places that are usually quiet when Jewish issues come up, until they're called out on it. I had hoped they wouldn't ignore something this egregious, but wasn't surprised when they did. But I also found some really strong allies, and greatly expanded my "Jewish twitter" circle.

In response to Wednesday's post, many Jews nodded and said "yep" and many non-Jews went "wait, what? really?" at my experiences. It's one of the reasons I shared, because I think it's often hidden. As Katherine Locke said in her post,


It is not easy to be Jewish in America. Many think it is because of stereotypes, but when push comes to shove, especially online, we turn toward our own and huddle close. It’s a collective memory safety measure.


It's also one of the reasons why I've started Instagramming our Shabbat candles.

I'm Jewish by Choice, which means I converted 4 years ago, after going before the Bet Din, after years of studying and classes, after a decade of soul searching. I made a conscious decision to be Jewish and I love it.

This morning, after I dodged the planter question, before I saw the RWA response, I celebrated Shabbat with my daughter's preschool. We said our blessings and thanked G-d for all we have. We sang joyful songs. It was adorable (because, preschool) and wonderful. 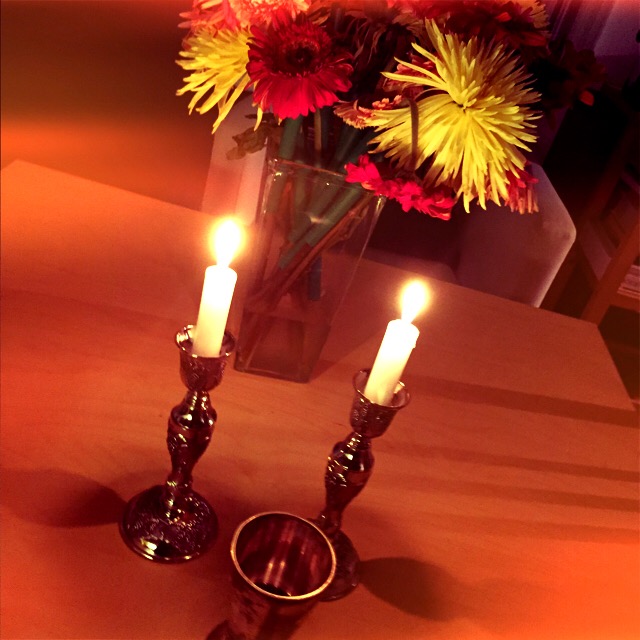