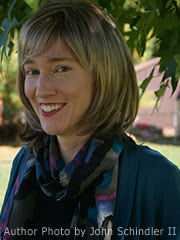 As part of her blog tour for The Junction of Sunshine and Lucky, Holly Schindler is stopping by to talk to us about her book, writing, and other things!

Your previous novels have been YA-- what's the difference between writing YA and MG and why did you make the switch?

Actually, I started writing YA and MG at the same time. A bit of backstory: I got my master’s in the spring of ’01, and was encouraged to devote full-time attention to getting my writing career off the ground. I still wanted to do my part to pay my own bills, though, so I started teaching music lessons in the afternoons. And I was shocked at how familiar those kids seemed—as familiar as the kids I’d known when I was in school! They actually inspired me to try my hand at writing in the juvenile market; I dove in headfirst, trying both MG and YA at the same time. (The first books I published were YA, but I’d been writing MG all along as well.)

The main difference is that your characters have different abilities, which changes your plot to some extent. Something as simple as the ability to drive can change your book dramatically; a teen has access to a car, so they can go literally anywhere. An MG character has a bike—their “backyard” is much smaller than a teen’s. It changes the shape of the book. 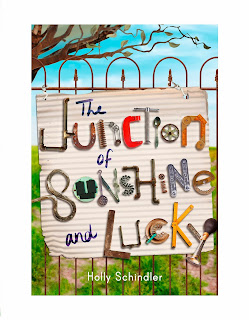 Librarians are always on the look out for books with diversity--especially stories that feature characters of color that aren't about race, so it's worth mentioning that your main character Auggie and the mean girl, Victoria, are both African-American. However, this fact is very subtly coded in the text (and one reference to Auggie feeling like her skin looked like mud while Victoria's was fine imported chocolate) so readers might miss it. Can you talk a bit about diversity in middle grade lit, why you made your characters African-American, and why you wrote it the way you did?

My YAs began with concepts: in A Blue So Dark, I played with the idea of mental illness and creativity being linked; in Playing Hurt, I explored learning the difference between loving someone and being IN love. But THE JUNCTION began with a figure—Grampa Gus. I saw him as clearly as I’ve seen anyone in my life. When I first envisioned him, he was African American. But as I drafted the book, I knew I wanted a neighborhood to look every bit as diverse as the figures in Auggie’s yard. I wanted to show the different faces who were all in the same boat.

Your book deals with a lot of heavier topics--class, beauty, eminent domain, changing friendships, and missing parents, and deals with them well, but it's not a heavy book. Why were these issues important for you to discuss and what was your process for dealing with them without making the story a total bummer?

It’s funny—early critique of the book when I was attempting to shop it was that the original beginning chapters were a bummer. (I certainly didn’t think so, but I did go back and rework those opening chapters several times—even after the book was acquired—in order to make them feel lighter.) The trick is pulling the reader in early on so that they know it’ll be a delight to come to your book—not something they dread! You want to draw a reader back, make sure they will finish your book, be hungry for another read.

If you had Auggie's artistic talent what changes would you make to your house? (Personally, I'm all about colored glass in my windows!)

I’m with you on the colored glass! And the sidewalk—I’d love that, too.

If you could go back in time and talk to yourself when you were Auggie's age, what would your advice be?

Never, never, never be afraid to say what you think. Even when it goes against what everyone else is saying or doing.

What are you working on now? 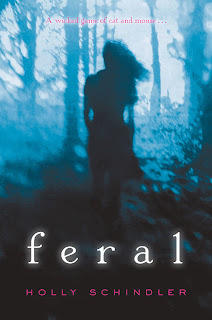 My next MG—and my next YA, Feral, which releases on August 26! FERAL is my first thriller:

It’s too late for you. You’re dead.

Those words float through Claire Cain’s head as she lies broken and barely alive after a brutal beating. And the words continue to haunt her months later, in the relentless, terrifying nightmares that plague her sleep. So when her father is offered a teaching sabbatical in another state, Claire is hopeful that getting out of Chicago, away from the things that remind her of what she went through, will offer a way to start anew.

But when she arrives in Peculiar, Missouri, Claire quickly realizes something is wrong—the town is brimming with hidden dangers and overrun by feral cats. And her fears are confirmed when a popular high school girl, Serena Sims, is suddenly found dead in the icy woods behind the school. While everyone is quick to say Serena died in an accident, Claire knows there’s more to it—for she was the one who found Serena, battered and most certainly dead, surrounded by the town’s feral cats.

Now Claire vows to learn the truth about what happened, but the closer she gets to uncovering the mystery, the closer she also gets to discovering a frightening reality about herself and the damage she truly sustained in that Chicago alley. . . .

With an eerie setting and heart-stopping twists and turns, Holly Schindler weaves a gripping story that will make you question everything you think you know.

What are you currently reading?

The Ghosts of Tupelo Landing

What are you currently watching?

What are you currently listening to?

The SteelDrivers. Will Hoge (he’s my favorite, actually).

Thanks for stopping by Holly!


Links to Amazon are an affiliate link. You can help support Biblio File by purchasing any item (not just the one linked to!) through these links. Read my full disclosure statement.
at 9:05 AM