It's another election, and another blogosphere round-up of why voting matters.

Here's my story on why I vote:

(This is largely just a repost of my 2008 post on why voting matters.)

Do you remember 2000? I do. I bet you do, too, but I bet the way I remember it is very different than the way you do.

2000 was my very first presidential election. My story starts early in the year, during the primary. I was living in Iowa, and the Iowa Caucuses are a thing to behold. You have no idea until you've voted in one. I live in DC now and am surrounded by people who are convinced they run the world. But to stand in an elementary school gym, literally standing for your candidate, that's something different. My adviser, a distinguished older gentleman with a Tennessee accent that sings, stood on a table and directed us, shouting to be heard over the crowd. 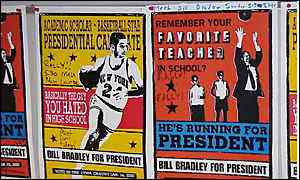 He knew who the crowd was going for. The Republicans were in a classroom down the hall, the Democrats in the gym. He knew who the Dems were going for, so everyone who was for Gore was ordered into the hall to do a head count. Those for Bradley stayed in the gym, clumped into groups of 10, so we were easier to count. I stood with a French professor, some other students, some people from town... we stood and were counted. We were the only precinct that Bradley won that night, but he won it by a landslide.* 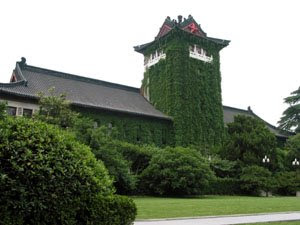 Fast forward to October. I was studying abroad in Nanjing, China. (Yes, that was my campus on the left.) In October, we had a two-week travel break.

For my last stop, I was in Harbin, sick, and having forgotten my towel, 5 days seriously overdue for a shower. I skipped the hostel and checked into the Holiday Inn** Do you know what the Holiday Inn had? SATELLITE TV! With English language news! I hadn't seen English language news since mid-August. I jumped on the bed, I took a bath, I wrapped up in the super plush bathrobe, and ordered room service. Then a friend from my program showed up at the hotel and we sat on my bed, eating pizza and watching CNN.

I have never enjoyed CNN so much. Jamie went to Georgetown. About about half an hour of catching up on the world, she turned to me. "You know, I think this election might be really close." She isn't dumb. This is just how hard it was to get English-language news behind the Great Firewall of China back then. We had NO IDEA. Later in the week we returned to Nanjing and told everyone it would be a close election. Little did we know...

A few weeks later, and I voted absentee. I was one of the few Americans on my program who voted.*** I was ecstatic because I didn't think I would get my vote counted. My friends were jealous, because they didn't. Our Chinese friends were confused--what was the big deal?

Yes, what was the big deal? And how could we explain it to our Communist**** friends with our limited vocabulary? Little did we know the bigger conversations to come...

November rolled around. We were exactly 12 hours off Central Time. We had class from 8-12 and figured that we'd just pop by the internet cafe on the way to lunch, see who won and then go eat.

For the next 7 hours, every internet cafe in town was filled with Americans hitting the refresh button every 30 seconds, wishing we could get more sites.

China filters its internet. There are ways to work around the internet and many people do--it's not actually that hard. But in 2000, wifi wasn't a thing yet, most of us didn't bring our own computers, and using an internet cafe, you really couldn't get around it. We were extremely limited in which Western news sites we could access that day. I just remember that MSNBC was reporting two different winners on the same page. I didn't understand. None of us did. A few weeks previous, I had made a joke that Bush would win the popular and Gore the electoral. My next prediction was that Texas would succeed in protest. Little did I know.

I was counting down the hours until 7pm, which would be 7am at my parents' house and they would be waking up. I was sure they would have answers, but they didn't.

That Wednesday, the day after the election, I woke up and called home again. Surely after a full day, they'd know something! Still no answers. We went to class. My teacher started with Bush winning. I told her he didn't. "No no, I saw it on CCTV this morning."
"Yeah, well, I talked to America this morning. They still don't know."

We waited. The guy I was seeing (Scottish! The accent!) threatened to reneg my American independence. I had broken English/French/Chinese conversations with my Swiss friends explaining the electoral college.

We waited. I watched the evening news every day and every time I heard Bush or Gore's name, I yelled for Xiao Mao to translate.

We waited. Xiao Feng wondered why they couldn't just share the job.

And that's why voting is important.

Why couldn't they just share the job? Trying to explain the two party system, to explain democracy to our friends, in our limited vocabulary was hard. I'm not sure they ever got it. These were students chosen for their party loyalty. But they were our friends. They were amazed at our decadence (we had hot water 24 hours a day!)***** They taught us how to play mah johng and phrases in local dialects. We helped them with their TOEFL preps. We watched movies together. We jumped on our beds, lip synching along with cheesy pop songs. We teased about boyfriends and girlfriends. They took care of us using Chinese medicine when we fell ill. We pumped them full of Tylenol when they had a fever or headache. We had our inside jokes and nicknames.

They were our friends.

When we got to China, we wanted to learn how to swear, so we asked. We couldn't figure out how to ask, so we asked our friends what words we couldn't say on television. They told us ziyou and we were excited and then we remembered we knew that word. Ziyou means freedom. Welcome to China.

Da Lu wondered why the party chairman just didn't appoint the next president.

And that's why I vote. Because I can.

We get to vote. We have candidates to choose from. A party chair doesn't get to appoint anyone. While we complain that our candidates are too similar, they do have differences. They can't just share the job.

And that's why voting is important. It was my first presidential election and it was staring me in the face. These were my friends who might never get to vote, and if they did, it would be one Communist versus another Communist, and they wouldn't vote for the leaders of the party. If they ever get to vote for the leaders, if they ever get a choice in parties, it will be after a serious revolution.

You can say one vote doesn't count and maybe it doesn't. But the act of voting counts. We think of it as a right, but it's a privilege that so many in the world don't get. We do. We can vote and that means something. We can vote, but most of us don't. So go do it already.


*He had given a very good speech on campus earlier that year. Gore never came.

**Seriously, the NICEST Holiday Inn I had ever seen. It came with bath salts! But I was just overjoyed by the soft bed and Western style toilet.

***Not that the others were disenfranchised. It's a long (and boring) story about where people had their paperwork sent.

****In China, we lived in a foreign student's dorm. They read our mail. They read our email. The maids wrote reports on what was in our trashcans, on our desks. In my program, which I HIGHLY recommend BTW, there were 3 of us to room, 2 Americans and 1 Chinese student. Being able to room with a Chinese student is a huge deal, but we also knew that in order to room with us, they had to be model students and citizens. But, by the end of the semester, Xiao Mao was sleeping until noon and had picked up some of my more atrocious grammar patterns.

******Xiao Mao would take 2 hour showers because the she was so amazed that she could. Then her friends would come over, too. Just to use our shower. Our shared shower (3 showers in the girls bathroom serving a floor of 30+). It was pretty grotty-dorm standard, but it had 24 hour hot water and was an absolute luxury. Also, our rooms only had 3 people instead of 8. Oh, and we had heat. Not much, and only in the rooms, not in the hall or common areas, but we had heat.

Labels: why i vote