Year of the Historical: Double Crossing

When Raizel's father buys his tickets from Russia to America, he also gets a child's ticket. Instead of her brother, Raizel will go with her father and help him keep house while he works to earn the money for the rest of the family to come. Raizel doesn't want to leave her home and family, but has no choice.

The journey is long and hard-- everything's more expensive than they budgeted for, and when there is food, unless they can guarantee that it's kosher they won't eat it. They don't have passports and have to sneak across the Russian border.

Throughout, Raizel remembers the stories her Bobbe told her, tying her to her home and family.

While this might sound like most immigration stories you've read before, it isn't, but I can't get into it what makes it different without MAJOR SPOILERS. So... just trust me on that, ok? It ends up being not what you'd expect.

Personally, I was most intrigued by the culture clash between Raizel's small village knowledge when she meets people from larger cities, people who make the richest people she knows look poor. Also, the different ways these people practice their Judaism. Raizel wonders what it is that makes someone Jewish-- is it the side locks and skull cap? Or something deeper inside? What if you keep a kosher house but eat tref when not at home?

Also, her amazement at the beauty of the Antwerp train station. It is such a beautiful station and I knew exactly what she was talking about. 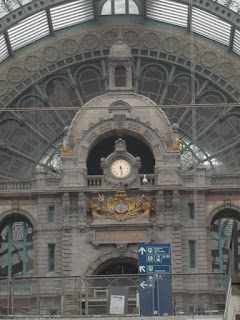 Most historical details are explained in context, but I would have loved an author's note that went a little deeper explaining the mistreatment of Jews in Czarist Russia, what the Siberian War was (I'm assuming the Russo-Japanese War) and the Pale of Settlement.

Things you might want to know: Be prepared for a large dose of Antisemitism. Also, there were one or two comments about "Wild Indians" which are historically accurate to cultural stereotypes and attitudes at the time, but...