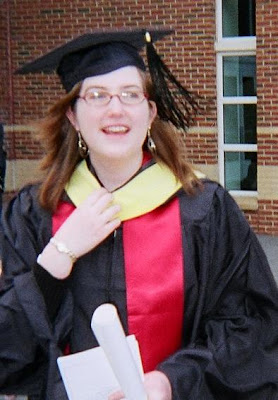 Well, some big changes here at Biblio File. Well, not here at Biblio File, but in my life. After three years I am no longer a "Counterfeit Librarian, Beltway Bandit and Femme Fatale Extroidinarie" and am instead a "Coffee addict, torch singer, and librarian ninja."

2 years ago, we moved and I stopped driving 1/2 around the beltway to get to work, but I still had to do large amounts of beltway driving to get to school, but, my dears, last Sunday, I finally graduated from University of Maryland's iSchool, so I'm now a big L Librarian. The only real change this makes in my day-to-day life at this point is that I no longer have to drive 1/2 way across the metro area to get to class 2 nights a week, no more papers to write, and I have to start paying full price ALA dues. I'm already working as a children's librarian, so I'm saved a job search. Yay!

Although, I will point out that is NOT my diploma. They will mail that to me next month. That is a poster of the University of Maryland, because well... I don't know why they gave me that. But they did.

In the mean time, my family was all here for graduation/Hanukkah/Christmas but they have all gone home now and the house is quiet and I'm wondering what to do tonight, as our box of Hanukkah candles was 1 candle so there will be some sort of improvisation.

Cybils short lists are coming out next week, which has me VERY excited, because I'm on the judging committee for middle grade/YA non-fiction and I can't wait to see what's nominated.

AND! I got a most fantastic handmade book from my secret santa. (My camera's being weird, so there are no pictures.) BUT! Secret Santa! You did not tell me what blog you blog on! I would love to know! THANK YOU SO MUCH!!!!

First up, as it's time for such things, is

Moxy's back! It's after Christmas and Moxy has to write 12 Thank You notes before she can go to California to see her father, whom she hasn't seen in years. Moxy does not want to write her thank you notes and 12 seems like a huge number. Luckily, she has an amazing beyond amazing plan to churn out her thank you notes lickity split and then she will be off to Hollywood to see her dad and be discovered.

Of course, it involves her step-father's brand new photocopier that she's been forbidden to touch. And some spray paint. Of course, it doesn't go to plan and unbelievable hilarity ensues.

Even better than Moxy Maxwell Does Not Love Stuart Little! This has some bigger issues and a little more meat, without getting bogged down or depressing. It's still hilarious and kids (and maybe some adults) will identify with writing Thank You notes as being the most horrendous chore ever assigned. Plus, there's spray paint. You can only imagine Moxy and spray paint...

Do you know how unfair it is that 98% of the country had a huge blizzard and there was a huge blizzard in my book and it was like, 65 degrees out? Frustrating doesn't even begin to cover it!

Anyway, enough of my whining about the weather. This books is three stories that all take place in the same town during the blizzard of the century. Jubilee's parents are arrested and she's shipped off to spend Christmas with her grandparents, only to have the train get stuck. She gets off, wanders into the Waffle House across the highway and meets Stuart, who takes her home. Normally she wouldn't go, but a bunch of cheerleaders ALSO got off the train with her and are also at the Waffle House.

Meanwhile, Tobin and his friends are having a James Bond-a-thon when their friend who works at Waffle House calls and says there are cheerleaders demanding Twister. So they are off into the blizzard, trying to beat other guys to bring Twister to the cheerleaders.

And then, finally, Addie messed up with her boyfriend Jeb, and he stood her up when she tried to apologize. (BUT! the reader knows Jeb. He was on the train with Jubilee and is trapped at the cheerleading Waffle House) It's the day after Christmas and she's at work at Starbucks, trying to figure out how to fix things with Jeb, how to not be so self-centered, and trying to get a pig for her best friend.

So while we have three seperate stories, they are entwined and main characters in one story become minor characters in another. Each author took a story, and I enjoyed them all. I wish I would have been at all the planning sessions for this, because that sounds like fun.

I liked all three stories. I can rank them in order of which I liked them, but I won't because I did really like all of them and think they worked really well together to make up the whole.

I'm working on my end-of-the-year retrospective--which books were my favorites, how much I read, and what I should try and read next year.
at 7:05 PM

Congratulations on your graduation! Nothing is cooler than a children's librarian ninja :D

There's a Mr Linky here where people have been posting their posts about their gifts, which hopefully would make it easier for your Secret Santa to come say hi. Some are remaining secret, or posting anonymous comments as Secret Santa, which is kinda cool :P But the curiosity would drive me mad. Anyway, I'm glad you're happy with your gift!

I really enjoyed Let it Snow too.

Congrats on graduation! I'm a December 2008 grad as well (Drexel). <sigh of relief.> Like you, I'm in a children's librarian job now, though I am supposedly getting a raise...I just hope it's enough to cover student loans. And those ALA dues!

First of all - Congratulations on your graduation!

I was just popping over to see if you had received your little secret santa gift and was glad to read that you did and that you liked it.

My email and blog are listed here now. Sorry that I forgot to put that in my card!

Congratulations! I'm working as a Children's/Young Adult Librarian and will complete my MLS in Dec.!

Congratulations on your graduation! :) I graduated from UMD with an English degree in '07. And I, too, was a "Beltway Bandit" (I love that, by the way) -- I commuted to school for three years. Annoying, but worth it. Go Terps! :)